Representative of Bielefelt in the capital

Mona Marshall
Wolfram von Bielefelt (フォンビ－レフェルト・卿・ヴォルフラム) is the youngest son of the former Maou, Cäcilie von Spitzweg, half-brother of Conrad Weller and Gwendal von Voltaire, and the fiancé of Shibuya Yuuri. He's known as "Little Lord Brat" and "The Selfish Prince" because of his hard personality and selfishness, although this starts to change as the story progresses. Wolfram possesses fire Maryoku, as well as being adept with a sword.

Yuuri's first day in the capital, he is invited to Celi's dinner with all her sons. Wolfram shows hostility to the new king, and insults his mother. This leads Yuuri to slap him on his left cheek, a sign of proposal among nobles in their culture. Afterwards, Yuuri picks up Wolfram's knife, accepting a duel. When he first becomes engaged to Yuuri he is extremely upset, but the idea quickly grows on him. He takes the engagement much more seriously than Yuuri does.

It's later revealed that Wolfram's heart is the key to the forbidden box Inferno on the Tundra.[1] As the box was brought from Seisakoku to Big Shimaron by Yelshi during the Greatest Fighter Tournament, being the key, Wolfram is absorbed by the box and trapped inside, at the same time activating the box.[2] Conrad tries to open it, but he fails and his hands are burned by the box's flames. Desperate and worried about his safety, Yuuri manages to forcibly open the box and goes inside to save Wolfram.[3] Inside, Yuuri finds Wolfram's body possesed by the box former key's consciousness,[4] who demands Yuuri to be quiet because his voice is able to disturb and "wake up" his vessel. Yuuri calls Wolfram even more loud, and he finally manages to wake him up and free him from the consciousness control. He hugs Wolfram while saying "I finally caught you..."[5]

Wolfram initially dislikes humans, even Conrad's father, Dunheely Weller. Celi says he inherited his selfishness from his father, although he can be very caring, reliable and honest. According to Conrad, his selfishness started to disappear as he gradually fell in love with Yuuri.[6]

Because of his "Mazoku pride", he does not like to admit that Conrad is his brother, even though he cares for him. His attitude towards humans improves throughout the series, progressing to the point that he accepts Yuuri's adopted human child, Greta, as his daughter as well and starts acknowledging Yuuri's parents as his future "in-laws" and also runs into a raging fire to save a human boy. Wolfram is also well known for his tsundere personality; someone who is initially cold and hostile towards another person before gradually showing a warmer side over time.

A major weakness is that he gets sea-sick. Yuuri also says that Wolfram cannot paint well, even though he insists on painting. For example, he tries to paint Yuuri, although it turns out unintentionally impressionistic. However, in the novels and manga it is said he could paint very well when he was young when he painted realism, but now he decided to change his style to cubism.[7]

The anime story is very different from the novels and manga. Wolfram follows Yuuri everywhere so he can keep an eye on him, and even sneaks into Yuuri's bedroom at night. He gets extremely jealous when Yuuri talks to a girl or good-looking guy and often accuses him of being unfaithful, which is sometimes used as comic relief.

During the course of the series, Wolfram has grown exponentially from a spoiled prince to a selfless young man who stands by Yuuri with no question. Though, he had no plans of becoming Maou in the first place, he was willing to protect and serve Shin Makoku when it was resolved that Yuuri would not be returning at the end of the second season, wanting to protect the beautiful job Yuuri did as Maou.

Years ago when he was a child, Wolfram accidentally slapped Elizabeth, Raven's niece, on her left cheek. Elizabeth never forgot this incident, insisting that they swore everlasting love that day, while Wolfram insists he forgot why he slapped her in the first place. Elizabeth becomes Stuffel's tool to separate Yuuri from the three brothers, pronouncing an engagement proposal to Yuuri. Elizabeth's real goal is to marry Wolfram, but Wolfram says that his only fiance is Yuuri. During the duel which ensues, (as Yuuri accidentally picked up a knife and a fork pointing it at Elizabeth; symbolizing a fight to settle a triangle love affair), Yuuri turns into the Maou, protecting Wolfram from being hurt by fire majutsu that Elizabeth summoned. He proclaims the two go on the date and remember their childhood memories. It is eventually learned that Wolfram slapped Elizabeth because he wanted to touch a butterfly that flew past, and Conrad was watching the entire event. He claimed he had forgotten about it because he didn't want to embarrass Elizabeth.

Near the end of the second season, there is a time when Wolfram is possessed by Shinou, who in turn was possessed by Soushu. The key he possesses, his heart, is ripped out by Shinou in order to open the forbidden box, Inferno on the Tundra. Because of this, Wolfram temporarily dies, but is revived when Shinou returns the keys to their owners. At the beginning of Season 3, Wolfram is chosen by the Ten Noble Families of Shin Makoku to become the next Maou, due to the belief that Yuui would not be able to return to Shin Makoku at the time. When Yuuri does return Wolfram's uncle, Waltrana, places pressure on Wolfram to obtain the throne. Because of this, Wolfram dissolves the engagement with Yuuri and travels back to his homeland, in hopes that he would not be used to sabotage Yuuri. When Yuuri hears of Wolfram's predicament, he and his retainers travel to the Bielefelt lands in the hopes of persuading Wolfram to return to Blood Pledge Castle, only to be forced into a formal duel by Wolfram himself.

In the process of aiming a strong attack at Wolfram, Yuuri realizes that Wolfram seems to be preparing himself for his last moments and gives his final words to Yuuri: "Yuuri. Be a good king." Realizing that Wolfram had planned the whole thing from the beginning so Yuuri could remain the maou, Yuuri absorbed the attack onto himself at the last moment, sparing Wolfram from damage.

The Ten Aristocrats then changed their decision to keep Yuuri as their king and Waltrana steps down from forcing Wolfram onto the throne. After a reconciliation between the two, Wolfram happily decides to annul the disengagement to a comically shocked Yuuri and proceeds to return to his normal attitude towards their engagement.

Yūta Higuchi as Wolfram in the musical. 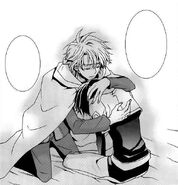 Wolfram comforting Yuuri in the manga. 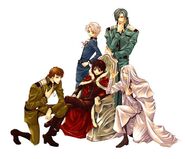