Ruler of the Bielefelt land

Koyama Rikiya
Waltrana von Bielefelt (フォンビーレフェルト) is one of the Ten Aristocrats of Shin Makoku and the current head of the Bielefelt family. He is also Wolfram's paternal uncle.

Initially, he was quite cold as he wasn't confident that Yuuri could be the rightful king to their kingdom as he deemed Yuuri not worthy. As the story progresses, he has been keeping an eye on what Yuuri has been doing and finally with the ten aristocrats came to a decision. He gradually accepted Yuuri and acknowledged him as king.

Painting of Waltrana by Wolfram. 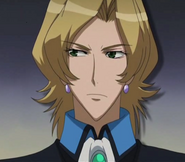