Shin Makoku (シンマコク), also known as The Great Demon Kingdom, New Makoku or Shinma Kingdom in some translations, is a country in the other world, and considered to be the largest Mazoku country. Almost all of the residents of the country are Mazoku. It was founded by King Shinou 4000 years ago.

Shin Makoku is a country where its highest ruler is the Maou. It is split into 11 different sections. In the middle of the country is an area under the direct rule of the Maou and the other 10 territories are each ruled over by one of the Ten Aristocrats.

The area under the direct rule of the Maou is the largest division of the country, and is considered to be the capital of Shin Makoku. It is where Blood Pledge Castle and the Shrine of Shinou are located.

There are two known ways of proposing. When a nobleman or noblewoman strikes another with their right palm across the person's left cheek, it means that they are proposing marriage. The harder, the more passionate your love is for the other. This method is archaic and has fallen out of fashion, but it is still an accepted method of proposal.[1]

The more common and modern method is called a "window proposal", where the person proposing stands outside of their partner's window and sings a song. After the song, they then throw a pebble at the window. If there is no answer, it is seen as an unspoken agreement and they then enter through the window. Traditionally, only men would propose marriage and the window proposal entailed shouting outside of the window as well as singing. The window would also be completely shattered with a large rock. However, because repairing the window cost too much money and women started to propose as well and they did not wish to act in such a manner, it was modified into the mellower, modern version.[2]

If someone drops a knife that means the person is challenging the other to a duel. If the knife is picked up, he or she consents to the duel.

Unlike some human countries like Svelera, Shin Makoku is very accepting of same-sex relationships and such relationships have actually been on the rise after the engagement of Yuuri and Wolfram von Bielefelt.[3] However, this was not always the case. The Ten Aristocrats decided that since the position of Maou was chosen by Shinou based upon the quality of a soul, it would be meaningless for the heads of their own families to be decided by heredity. Thus, it was no longer necessary for the heads of the ten aristocratic houses to marry and produce an heir. This eventually led to nobles being free to pursue same-sex relationships and the general public followed suit.[4] In one of the Drama CDs, Waltrana stated that he's more interested in marrying a man instead of a woman.[5] 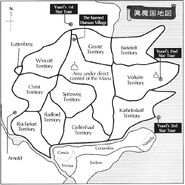 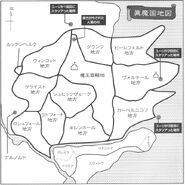 Map in Japanese
Add a photo to this gallery

Retrieved from "https://kyoukaramaou.fandom.com/wiki/Shin_Makoku?oldid=12846"
Community content is available under CC-BY-SA unless otherwise noted.