Half Shinzoku
Half Human

N/A
Saralegui (サラレギー) is the King of Small Shimaron and Yelshi's twin brother. He is called 'The Two Faced Man' because acording to Josak, he has two names and those who have seen his face, no matter who it is, become his prisoners.

Saralegui is an attractive, slender young boy with long blond hair and a pair of big golden eyes. Because he and Yelshi are twins, their appearance is almost identical and the only difference between them is that Sara has long hair instead of short. He also seems to be a little taller than his brother. Saralegui always uses a pair of purple glasses ir order to prevent people to see his golden eyes, a characteristic feature of the Shinzoku.

After he was resuscitated by Yuuri, however, his eyes turned darker because he poured too much of his Maryoku.[1] Murata said that no one will longer believe he is a Shinzoku looking like that, but Yuuri sees no problem since Saralegui is the King of a human country, and having his Shizoku blood neutralized can allow him to have a normal life as a human.

Yelshi was born to Alazon, the former Empress of Seisakoku, and Gilbert, the former King of Small Shimaron. He has a twin brother named Yelshi. However, when Saralegui was born he was stillborn, so his mother used the forbidden box Inferno on the Tundra to bring him back to life. Saralegui always believed that when his mother found out he had no Shinzoku powers, she abandoned him and sent him to live with his father in Small Shimaron. In reality, she sent him away because she thought that if he stayed in Seisakoku, the shadow of death that loomed over him would grow and take away his life. When his father died, he became the King of Small Shimaron.

Story in the anime

The anime story is very different from the novels. Yelshi does not seem to exist and instead he has a body guard, Berius, who is later revealed to be his uncle. As in the original story, he also has the power of hypnosis.

During Yuuri's visit to Small Shimaron, Sara takes an arrow in Yuuri's place. Yuuri is moved and even Wolfram, who had previously shown a strong dislike towards Sara, is touched by the young king's attempt to protect his fiancé. However, Murata and Conrad still remain suspicious of Sara's true motives.

It later becomes clear that Berius was the one who fired the arrow as part of a plan Sara concocted in order to gain Yuuri's trust. Sara finally reveals his true colors, using his power to manipulate Yuuri into attacking a fleet of Big Shimaron battleships. His betrayal leaves Yuuri completely shaken. Also in the 3th OVA episode, Sara had means to use Yuuri's power for his own selfish reasons, whilst using Wolfram as bait. Sara attempted to stop Wolfram's heart in order to get Yuuri to give him what he wanted. 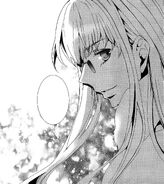 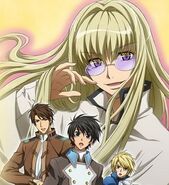