Marvin Lee
Josak Gurrier (グリエ・ヨザック) is a childhood friend of Conrad Weller and a spy for Shin Makoku who reports everything to Gwendal von Voltaire.

Josak is a muscular man with orange hair that reaches his shoulders and blue eyes.

In the anime, he is often seen wearing a plain khaki-colored clothing that reaches his knees, black pants and brown shoes. He sports a brown arm band around his right arm and sometimes bandages are wrapped around his arms and legs. This type of look is commonly seen among the civilians, and he arguably dresses like this to look akin to the common folk due to his job as a spy. At some cases, he dresses like a female for his work, and even carries a pink dress around since cross-dressing saved his life many times in the past and he treats the dress as a good luck charm.

Josak is a happy-go-lucky individual who often smiles and snickers. He is a kind-hearted man who values the well-being of his country very much. He is said to do almost anything for the sake of those he considers dear to him. Despite his cheerful personality, he can also be serious and fearless, especially when the situation calls for it. He sometimes voices out his opinions, even to the stern Gwendal, but usually he is quick to respond whenever he is given an order.

In the manga, Josak seemed more serious. At chapter 80, while remembering what Gegenhuber had done, he flew in an bursting outrage, saying that he would never betray his own country even if he was born 'with the blood of the enemy'. Although his cheery personality was still there, as he sometimes calls himself 'Gurrier-chan' or even 'Big Sister' when addressing himself to Yuuri.

Like Conrad, he's half-Mazoku and half-Human as he was born from a traveling Mazoku and a human prostitute. His mother abandoned him at a young age and he was taken in by a local church. He inherited his orange hair and blue eyes from his father.

However, in the anime, it's said that he was born from a travelling Mazoku and a human woman. He was born in Big Shimaron and lived there until he was 12. Mother and son were sent to a place on the country where they isolate women who have relationships with Mazoku, along with her children. The conditions were very poor and the food was scarce. One day, his mother died and Josak was left alone.

He did not receive any education in Shimaron at all and so received all of his education at the Shin Makoku Naval Academy. While visiting his mother's grave, Conrad and his father, Dunheely Weller, found him and took him with them. Ever since then, he and Conrad became good friends. Josak was one of the troops in the Luttenberg platoon: a special platoon consisting of half-bloods. Josak participated in the Battle of Arnold 20 years before the present storyline, but only he and Conrad were the only survivors.

Gaku Shindō as Josak in the musical. 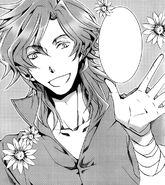 Josak and Conrad in the manga.

Josak dressed as a woman.