Gilbert disappeared into the waters of Shimaron during the war, 20 years ago. Although he wasn't King at that time, he was the son of one of Shimaron's most poweful families. At some point, he shipwrecked and was washed-up on the shores of Seisakoku. Gilbert was found collapsed and dying by the Empress of Seisakoku, Alazon, who helped him. They quickly fell in love and had two baby boys, the twins Saralegui and Yelshi.

Years later, Gilbert returned to the now country of Small Shimaron with Saralegui.

Gilbert in the anime. 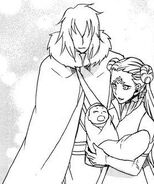 Gilbert with Alazon and the twins.
Community content is available under CC-BY-SA unless otherwise noted.