The Lion of Luttenberg

Half Mazoku
Half Human

Conrart Weller is the second son of the previous Maou, Cäcilie von Spitzweg, and a great swordsman, who is from one of the Three Royal Families, Dunheely Weller. He's also the half-brother of Gwendal von Voltaire and Wolfram von Bielefelt.

He is a calm and kind-hearted person who is sworn to protect the Maou at all costs. He is often seen with a smile and usually talks with a gentle voice.

In the past, however, Conrart was described to be a "terrifying man that even crying children would go silent before him". He used to be stern and sometimes rude when talking to others, and seemed to have much pride on his swordsmanship skills that he doesn't participate in practices during his stay at the military academy. But because Shibuya Shouma told him that he should never look like that in front of his unborn son, Yuuri, during the time Conrart was put in charge of the new Maou's soul, Conrart started to change his ways and began to smile more often.

Conrart values the Maou's safety among anything else; he even declared that he would give his chest, arm and even his life for him. He also cares for his family, but he is confident about his brothers' abilities as soldiers so he doesn't usually worry about them.

Conrart was born from a Mazoku and a human, making him a half-blood, and because of that he possesses no maryoku. However, he is respected because of his excellent swordsmanship and is regarded as the best swordsman of Shin Makoku. Because of his achievements in the war 20 years ago, Conrart was granted status equal to that of the Ten Aristocrats. Although it seems he has forfeited that position to become the Maou's bodyguard. Despite of that, he is still referred to as "His Excellency" or "Lord Weller".

He was nicknamed as the "Lion of Luttenberg" in the past. According to Wolfram, it was because Conrart was born in Luttenberg and he used to have longer hair, which may have resembled a lion's mane. It might also have to do with the fact that during the war 20 years ago, he was the captain of the Luttenberg division, which was a division made up of only half blood troops.

Conrart and Josak are friends ever since childhood. Conrart met Josak while following his father, Dunheely, on his journey. They have gone through many battles together, including the Battle of Arnold twenty years ago, where only the both of them survived. He was also claimed to be the godfather of Yuuri, as he was the one who "gave his name", although in the manga it was said that Conrart only told Yuuri's mother, Shibuya Miko, that July is called "Yuuri" in his country, and he never would have thought that Miko would actually use it as her son's name.

17 years before the present time, after the war had ended, he was put in charge of Julia's soul at her request. It had been decided that her soul was to be the next Maou and so Conrad was told to take the soul to Earth and to find a suitable family to raise the new Maou. In flashbacks, it is shown that Conrad was a reckless and rude person when he meet Yuuri's father, and Shouma got angry at him for it and told him he should always show a smiling face to his child.

When Murata is transported with Yuuri to Shin Makoku for the first time Yuuri meets up with Conrad. While trying to get Yuuri out of danger Conrad loses his left arm and disappears and is thought to be dead. Later, he reappears with a new arm. It is explained in the novels that this "new" is the arm of his ancestor Robert Belal who was transported to Earth in 1798 and after he died the arm never rotted so the arm was handed down through the generations of the family to his great great grandson Richard Dueter. When Conrad's arm was cut off Shinou took the arm and gave it to Conrad.

It was revealed that Conrart's arm is the key to one of the forbidden boxes, the "End of the Wind".

Instead of being a decedent of Page Belal, he had an ancestor named Lawrence Weller who fought alongside Shinou.

After Conrad loses his arm in a battle, he disappears after swearing to Yuuri that he'll never die and leave him alone. Later, he reappears with a new arm, and seems to have betrayed Shin Makoku by joining their human enemies, Big Shimaron, who were after the four boxes. However, it is learned that Conrad only betrayed them on Shinou's orders, to learn about the whereabouts of the boxes. His plan was, when the four boxes were gathered, to steal them and return to Shin Makoku. He went as far as pushing Josak off the edge of the cliff to show his alliance to Big Shimaron (although it turned out that was a feint to send Josak to retrieve reinforcements). When King Belal orders Conrad to execute Yuuri, Conrad instead frees them, and protects Yuuri from arrows. Once Conrad returns to Yuuri's side he states he'll accept any punishment given to him by Yuuri.

Conrad travels with Yuuri to Earth to obtain the last forbidden box. After they retrieved all the boxes and Shinou was released, Conrad lost the use of his left arm. He regained it once Yuuri was taken over by Shinou. He agreed to fight Yuuri because it would be what Yuuri wanted of him and the others. He is one of the first to greet Yuuri when he returns at the beginning of the 3rd season and the end of the 2nd season.

In the 3rd season Conrad travels with Murata to Big Shimaron to figure out the White Ravens mystery. While there, he infiltrates the castle stating he is one of the rightful heir's to the Big Shimaron throne. The Weller family had ruled Big Shimaron since Shin Makoku was founded. He once again stands on the opposites of battlefield in Big Shimaron against Yuuri but this time does not pretend to betray him. 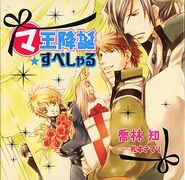