Cäcilie von Spitzweg (フォンシュピッツヴェーグ・卿・ツェツィーリエ) was the 26th Maou of Shin Makoku, and the predecessor of Shibuya Yuuri. She has three sons: Gwendal von Voltaire, Conrart Weller and Wolfram von Bielefelt, whereas each of them have different fathers. She is also one of the three great witches of Shin Makoku, known as "Golden Cäcilie" or "Golden Celi".

Cäcilie is a gorgeous woman with curly blonde hair and emerald green eyes. She also has a very sexy figure that Yuuri once referred to her as "Ms. Sexy Queen" or "Ms. Pheromones".

In the anime, she is mostly seen wearing a black dress with a high slit that exposes her leg, dark blue stockings and high heel pumps of the same color. She also wears red lipstick, red nail polish and a silver necklace with a red gem. In parties and other occasions, she is seen wearing a white dress with see-through purple sleeves and frills at the hem along with circular earrings and her hair tied up in a high ponytail. Sometimes, as the "Sexy Hero", she wears a tight red gaudy outfit with a black leather choker and a cape. In this form, she wields a whip. In battle, she can be seen wearing armor with golden greaves and breastplate along with a red cape, and she wields a sword similar to the ones her sons have.

Lady Cäcilie is a very loving person, earning herself the nickname "Huntress of Love", even though she was the one who referred to herself as such. Although initially, Cäcilie seems to be rather airheaded and gets flirty sometimes, she is actually very astute and intelligent. She seems to be very cheerful and gets excited easily. She is also able to control situations effectively.

Because of her beauty, many men ask for her hand. Sometime before, when Wolfram was still a baby, Cäcilie joked about letting the baby choose who will be his next father among those who would like to marry her. She often goes around meeting acquaintances in a quest to search for love. Despite this habit of hers, she is a very caring person, especially to her sons. She gets worried about them and gets melancholic when they get hurt.

Cäcilie is one of the three great witches of Shin Makoku; three women considered to have great power in all of Shin Makoku. Wolfram once said that his mother might be able to use Majutsu even in human countries. Like her son Wolfram, she is able to use fire magic. In the anime, she is seen having admirable skill with a whip. Her skill tends to scare her enemies, and if they ever meet her the second time, they are usually unwilling to fight her again.

Cäcilie was the previous Maou of Shin Makoku, but she gave up her authority to her older brother Stuffel, one of the Ten Aristocrats and the one representing the Spitzweg house, because she believed she was not fit for politics. Having been replaced as the Maou by Yuuri, Cäcilie takes advantage of her open schedule to hunt for men on a "free and easy quest for love."

A few months after, she returns from her boating venture to ask for Raven to re-marry her. However, when she falls into a sand bear's burrow, he jumps in to save her, and they figure out that they just aren't right for each other. She returns to her quest for "free love" and he keeps his promise to stay by Stuffel's side.

When Wolfram temporarily dies, she is devastated and throughout the series she can be seen doing her best to protect her sons without directly interfering. 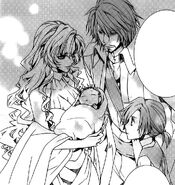