Hashi Takaya
Bob (ボブ, Bobu) is the Maou of Earth. He's also known as the "Maou of the financial world". While Bob's age is unknown, it's said he appears to be around maybe 50 or 60 but in reality he is much older. He has been the Maou of Earth since at least 1938, making him probably at least 80 years old. Miko always refers to him as "that demon who looks like a movie star" because he looks like Robert De Niro.

He used to move around a lot but he has settled in Arizona. 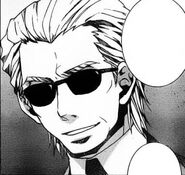 Bob in the manga.

Bob with young Shouri and Yuuri.
Community content is available under CC-BY-SA unless otherwise noted.